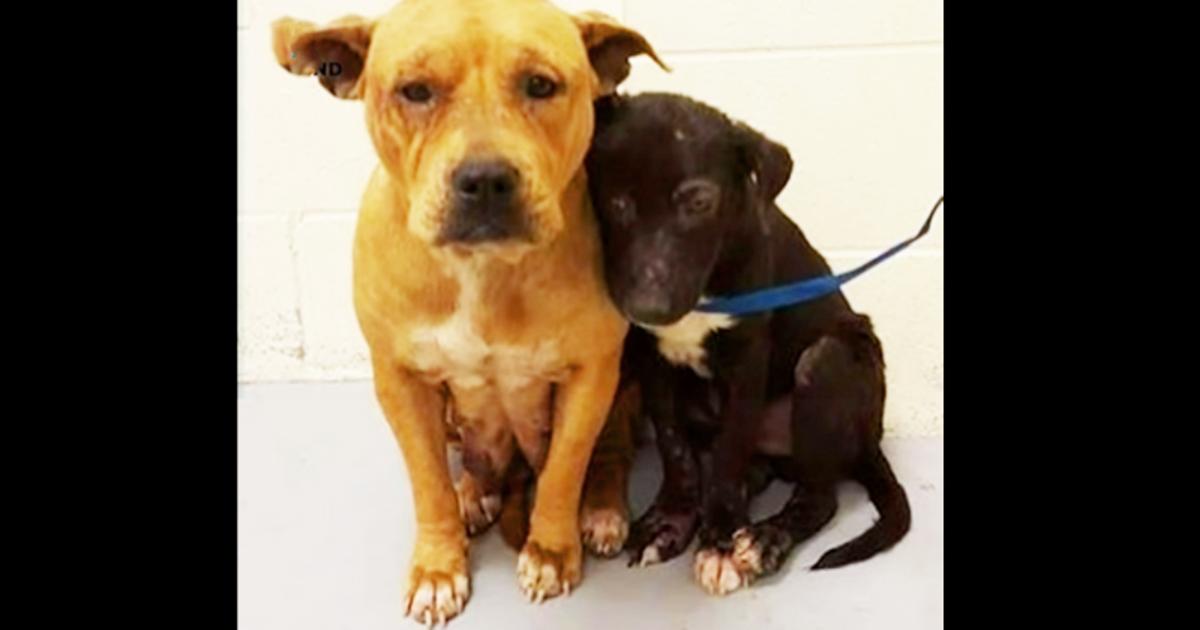 They clung to each other out of fear, uncertain of what their future might hold. But look at their lives now in this heartwarming update.

No reason was given, but when these two dogs were dropped off at the shelter by their owner, they clung to each other out of fear, uncertain of what their future might hold.

Bridget and Louie, as they are now named, were photographed upon their intake at Montgomery County Animal Shelter in Conroe, Texas this past week. Little did they know that just one day later, they would begin their journey to a new life.

Both dogs were suffering from signs of neglect, with mange and matted fur. But they were obviously attached to one another, so the shelter decided to keep them together in their kennel.

Louie, the smaller, black dog, had a barbed-metal collar jutting into his neck.

Bridget’s upper teeth were ground down to her gums and appears to have had multiple litters. The condition of her teeth could be as result of chewing on metal, such as a chain.

Dog fighters are also known to file down a female dog’s teeth to prevent injuries to males during breeding, or if they are to be used as bait animals. It’s heartbreaking, no matter what the cause.

The two dogs were pulled from the shelter by the rescue Texas Animal Society. They were picked up by their foster mom and dad and were soon on their freedom ride to their temporary home.

When the two arrived at their foster family’s family the first thing they did was scope out the couch! Bridget fell in love with it and “was finally content and could sleep.”

They are enjoying the feeling of the sun on their faces while relaxing on the porch.

And there’s plenty of time for snuggles too.

The future is definitely looking brighter for Bridget and Louie. In fact, after a little bit more healing and recovering, the two were adopted through the Texas Animal Society website!

Bridget is now 100% heartworm-free and has gone to Canine Good Citizen training. And Louie has become a “social butterfly”, enjoying his time at doggie day care and making lots of friends!

But the two are still each other’s favorites. They love playing together.

And they love each other’s company.

Share Bridget and Louie’s story with your friends and help spread the word about the importance of fostering animals!