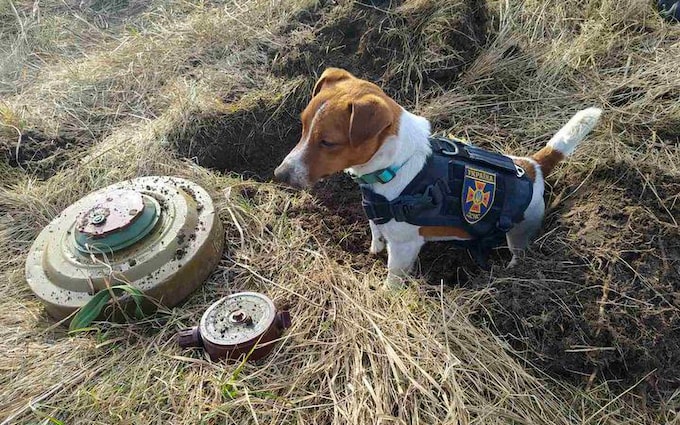 The bomb-sniffing dog has been helping Ukrainians locate Russian explosives since the start of the invasion.

Since the start of the Russian invasion earlier this year, 2-year-old Patron has been busy at work detecting bombs and sniffing out landmines.

Before the invasion, the pup was formally trained as a bomb-sniffing dog for the State Emergency Service of Ukraine and his training proved to be quite useful as he’s now serving in the Chernihiv region in northern Ukraine.

When Russia invaded Ukraine at the end of February 2022, Patron was put to work to sniff out bombs and he ended up finding over 150 explosive devices and counting!

Needless to say, Patron is quite the hero and is starting to be recognized as such. In fact, Patron has so many fans that he even has his own Instagram account! On the page, you can see regular updates and posts about Patron’s heroic work.

Thanks to his breed, Patron is a phenomenal bomb-sniffing ally. In fact, according to the American Kennel Club, Jack Russel Terriers are known for their incredible work ethic and eagerness to please.

Being bred as fox hunting dogs, they have a natural ability to use their senses to locate things and have been described as “tireless” when it comes to the hunt.

Beyond their general personality, Jack Russel terriers are also a great size for the job considering their body weight isn’t generally enough to trigger a landmine. They can walk right on top of one and alert their handler or bystanders before it’s too late.

Despite their breeds, some dogs have a better knack for bomb sniffing than others and Patron is definitely one of those dogs!

The Ministry of Foreign Affairs in Ukraine even celebrated Patron in a recent Twitter post, explaining that the pup has “discovered over 150 explosive devices in #Ukraine since full scale #Russian invasion began.”

Patron was also showcased on the Twitter account of Ukraine’s Centre for Strategic Communications and Information Security. They wrote (translated):

“One day Patron’s story will be turned into a film, but for now, he is faithfully performing his professional duties.”

People have become so enamored and impressed with Patron that many have taken to drawing him fan art!

He truly is one inspirational dog!