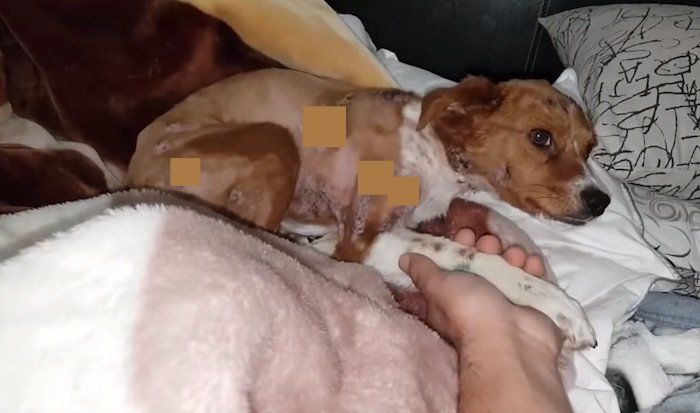 For three days this poor pup was hanging from a tree, fighting for his life.

A puppy found tortured and hanging from a tree is in safe hands thanks to a Good Samaritan. The man who rescued the puppy was walking through a village in Greece when he heard the dog crying. He went to look and found the puppy hanging from a tree, his back legs barely touching the ground. The dog was fighting to breathe and had burn marks and scrapes all over his body.

When the Good Samaritan went to a nearby house to ask if the people had seen anything, they said they had heard crying for three days but didn’t know where it came from. The man rushed the dog to a veterinarian who called Takis. Takis is an experienced dog rescuer who runs an animal shelter in the area. He took the poor pup in and named him Ozzy.

Takis noted that the terrible ordeal had traumatized Ozzy, giving him “a shock in the mind” as Ozzy was constantly walking in circles – likely his brain was rattled from being hung up and spinning on a rope for three days. He was so disoriented he couldn’t even find his own food.

But with time and love Ozzy has transformed into one of the most energetic and loving dogs of the shelter.

Takis says that Ozzy is now one of the happiest dogs in the shelter and never causes any problems, except maybe for being naughty with the other puppies and destroying Takis’ duvet!

Watch Ozzy’s heartwarming recovery in the video below.