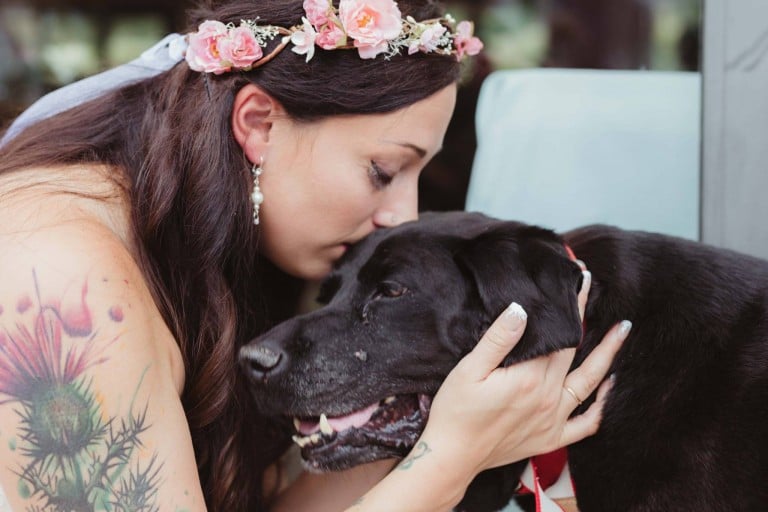 He hung on just long enough to be a part of his mom’s big day.

When Charlie Bear, the beloved black Labrador Retriever of bride Kelly O’Connell, was too weak to walk down the aisle on her wedding day, he was carried by the maid of honor so that he could be by Kelly’s side for the special moment.

It meant the world to Kelly that Charlie Bear was able to be a part of her big day. She adopted Charlie when he was a puppy. Charlie was 15 years old and had been battling a brain tumor for several months. Kelly and her new husband, James Garvin, are both veterinarians and it was an emotional moment for the couple.

“Both of us just dropped to our knees and started crying,” the bride told ABC News. “To see him be carried a few feet, it kind of solidified for me that it’s not the Charlie he liked to be. He was aging, and it hit me knowing that he lost a lot.”

Kelly’s sister and maid of honor was leading Charlie down the aisle. But when he became too weak to walk, Katie (who is only 5’3″) picked up the 80-pound dog and carried him to the altar.

The emotional moment was captured by Kelly’s friend and photographer, Jen Dziuvenis. “When your beloved dog who is at the end of his life can’t make it back up the aisle and your sister scoops him up and carries him…THAT is love,” Dziuvenis wrote on Facebook. “There isn’t enough mascara in the world for these moments. Dog people are the best people.”

The wedding was one of Charlie’s last days with his family. Charlie passed away a few days later.

“He was a very sweet dog. He loved everybody, but I was definitely his person,” Kelly said.

Share this loving family moment with your family and friends.