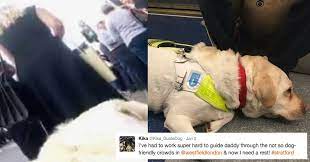 When his wife watched the video later she was horrified. They hope it will raise awareness.

Footage that a blind man’s guide dog recorded while they navigated the streets of London is helping to raise awareness about the challenges they face in the city.

Amit Patel lost his sight in 2012 after which he got his guide dog, Kika, to help him travel around London, England. He was alarmed to discover the indifference and abuse he encountered on a daily basis. To highlight the issue, he strapped a GoPro camera on Kika and recorded his excursions. His videos have shown Kika getting hit, and his requests for help being ignored.

People often hit Kika on escalators in their rush to get by them. “They have loads of space to get past, but they seem to think it is fun to barge into a blind person,” he told the Daily Mail.

“Kika always sits to my left hand side so we often block the escalator and people will hit her with bags and umbrellas to get her to move out of the way. The worst part is the tutting and negative comments behind me. People are so rude and arrogant and assume they can do whatever they want.”

When Amit and Kika return home, his wife Seema reviews the footage and posts it to Twitter. They’re hoping the videos help make people more aware of the issues guide dogs and their owners face.