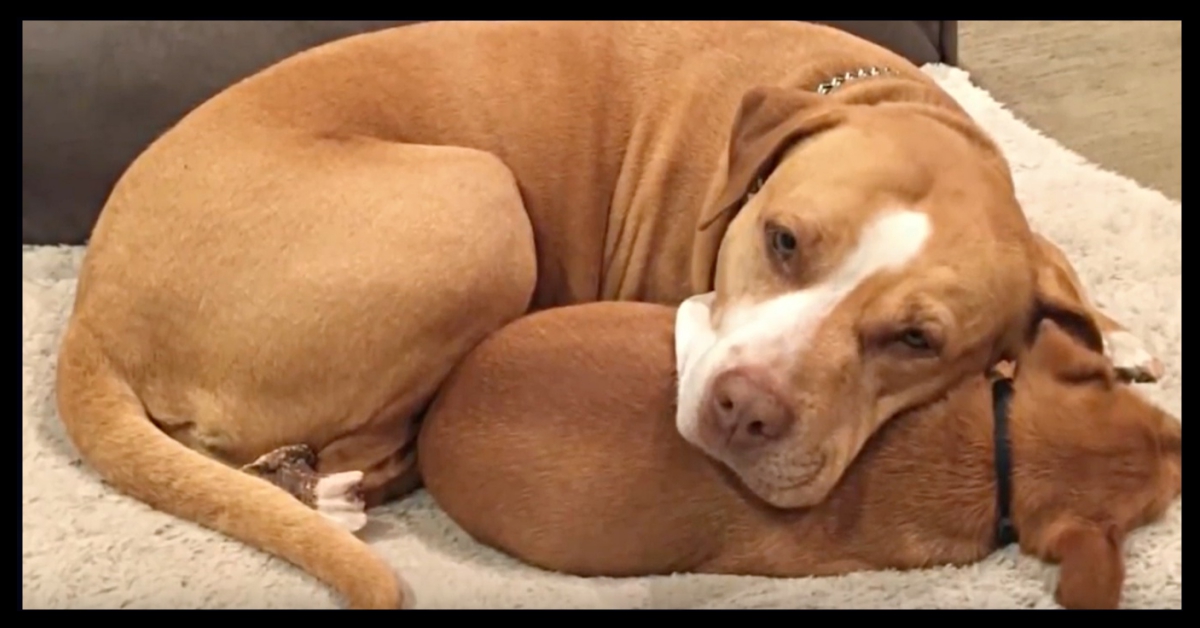 If you understand dogs, then you’re aware of their unwavering loyalty. They are both loyal to the humans they love and the dogs they connect with. A lot has to do with their “pack mentality.” Dogs, like their ancestors, are pack animals. Most dogs adopt their own family, their own pack.

In a shelter setting, it can be extremely isolating. Luckily some shelters allow for a kennel mate. The shelter volunteers will even evaluate how some dogs connect with each other in a group setting before choosing the best candidate for their kennel partner. Pretty smart idea, huh?

Two dogs, Merrill and Taco, are best friends. Merrill is a three-year-old Pit Bull and Taco is an eight-year-old chihuahua. They look very different but they don’t know that, or maybe they don’t care. They connected and formed a strong bond while living at the Rocket Dog Rescue shelter.

While living at the shelter, Merrill needed life-saving surgery. The moment she came out of surgery, Taco was there to keep her company and comfort her. Taco helped Merrill get through a very traumatic time and their bond got even stronger. In many ways, Taco was Merill’s hero.

After Merill’s surgery, if the two were separated for even a few minutes, they would cry loudly for each other.

Then, on a very special day, Merrill repaid Taco for helping her get through surgery. A potential adopter came into the shelter and fell in love with Merrill. But the moment the adopter tried to separate her from Taco, the two dogs cried loudly! It was totally heartbreaking. How could the adopter separate two dogs that love each other this much?

The adoptive dad thankfully had a big heart and he adopted both dogs! Now Taco and Merrill NEVER have to be apart.

Their story is one that will make your entire body smile! A dog’s love is like no other, am I right? Watch the sweet dogs’ entire story in the video below ????