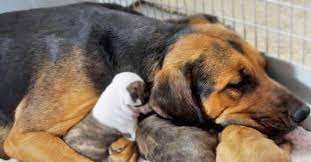 They save her from euthanasia, but it’s what she does at the rescue that has everyone talking…

When a dog arrived at the Pinal County shelter with her two puppies and was put on the euthanasia list, Dr. Deborah Wilson of Circle L. Ranch Animal Rescue & Sanctuary knew she had to save her along with her 6-day-old puppies.

The shepherd mother was busily nursing when the animal rescue saw an email that alarmed them – a man was threatening to drown 9 Pit Bull puppies if they were not picked up that day.

That’s when the Deborah and the rescue community rallied. Deborah had an idea about how Circle L. Ranch could help the poor puppies and it involved her shepherd mother.

While 4 of the puppies went to another rescue, the ranch took in 5 puppies. They guessed the puppies are around 3 or 4 weeks old. Seeing how well the mama dog was nursing her two young, they brought their new rescues to her to see how she would respond.

“We introduced the runt to her, she sniffed him and licked him, we placed him down on her nipples and he started eating right away. She was OK with it and seemed pleased. So one by one we brought in the others, she excepted [sic] all of them,” Deborah wrote on Facebook.

“She is the best mom. Even though the new five are older, they are smaller than her two.” The mother is now nursing her two babies plus her newly adopted charges with no complaints.

“Thanks to the kindness of rescue folks and social media, these innocent puppies were not drowned,” a relieved Deborah wrote. “They will be fed, cared for, spayed and neutered and eventually adopted out at the ranch,” she said of all their young charges.

It’s incredibly heartwarming to read how people like Deborah and the other wonderful people in the rescue community are working tirelessly to help save animals like these puppies and special mother.

Share this surrogate mom’s story with your friends and family!