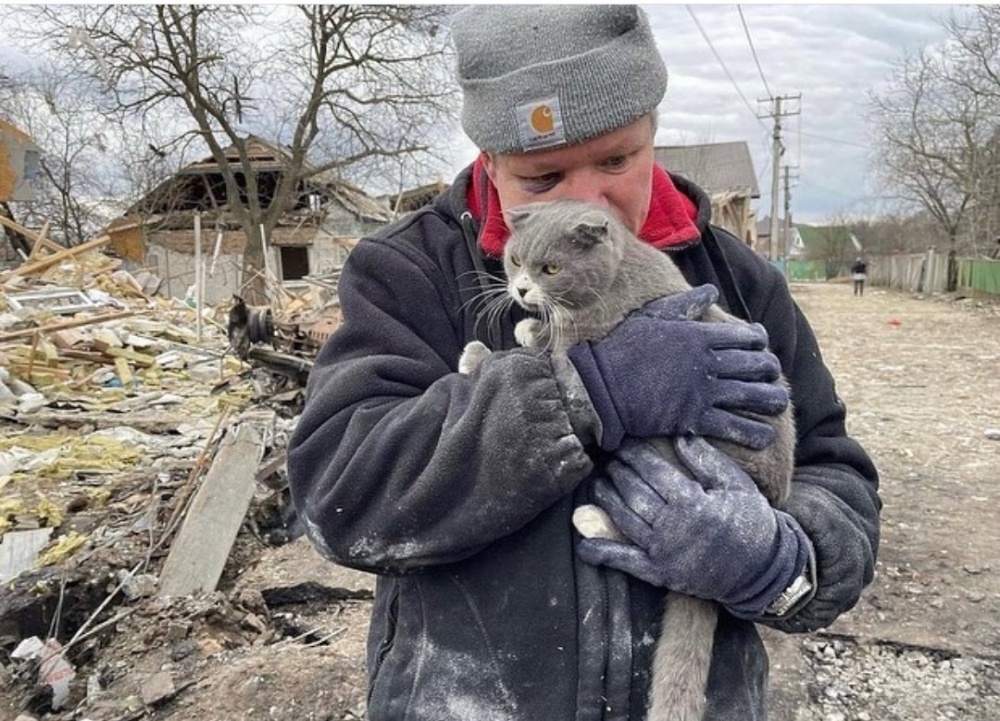 A grieving man hugs his cat for support after Russian bombs destroyed his family home in Ukraine, killing his wife, daughter, grandchildren, nieces, and sister.

Since then, the fighting has only grown more deadly, killing innocent civilians, terrifying animals, and causing millions of people to flee to nearby countries, often with pets in tow.

Meanwhile, heartbreaking photos coming out of Ukraine continue to illustrate the deadly effects of Putin’s war.

Now Ukraine’s Ministry of Foreign Affairs has shared photos of a Ukrainian man clutching his family cat, his only family member to survive after Russian bombing destroyed his home in Marhalivka, Ukraine.

According to the heartbreaking Twitter post, the 54-year-old man, Ihor Mazhaye, had shared the house with 12 family members, including his daughter, wife, sister, nieces, and two grandchildren.

But when Russian troops began bombing the city, the family’s house was destroyed, killing all 11 women and children inside.

The heartbreaking photos show the 54-year-old man clinging to his cat–now his sole surviving family member–as people searched through the rubble of his former home. Sadly, this grieving man is just one of many Ukrainians who have lost everything in this tragic and senseless war.

Ironically, Mazhaye and his family had moved to this town in Western Ukraine, which seemed safer than their original home in the capital city of Kyiv.

But this tragic story, which was reported by Business Insider, shows that nobody is safe from the escalating violence.

We can’t even imagine the pain this grieving father, grandfather, husband, uncle, and brother must be going through right now, which is why we’ve teamed up with Greater Good Charities to provide life-saving support during this crisis. Please make a donation to help us rush emergency aid to people and pets in Ukraine. Your donations will provide nourishing meals and critical supplies to help Ukrainian people and animals fleeing from attack. Please give what you can today.