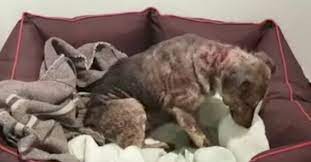 When Angel was seized from her owners she was riddled with burns and mange. But just look at what two months of TLC can achieve!

Angel was confiscated from her owners for severe neglect and taken in by Sidewalk Specials. Her body was riddled with her sad story; she was covered with mange and burns the rescue in Cape Town, South Africa, said Angel was one of their worst cases of neglect. But the moment Angel arrived at her foster mom’s in Cape Town, South Africa, she knew things were going to be different.

First, she had her very own bed to lay in – and she loved it! Second, she had a doctor to take care of all her illnesses and pains. And third, she soon was a adopted by a loving family with dogs, cats and plenty of love and fun to go around. Seeing Angel two months later, it’s hard to recognize her, she looks so healthy.