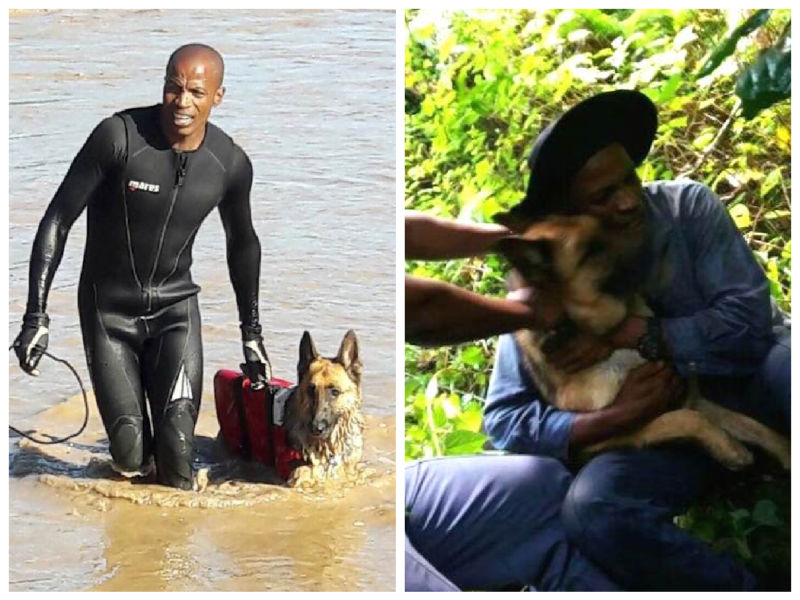 He said losing his K9 was like losing a child, but after a three day nightmare, this police officer couldn’t hold back his tears when got the news that would heal his broken heart.

K9 Olive tracked down a missing man much to everyone’s relief, but it would be the start of her handler’s worst nightmare when she went missing herself.

K9 Olive and her partner, Constable Songezile Katikati, were called out to a forested area in the outskirts of Mahlubini, Sulenkama, South Africa for a search and rescue mission after a man who went into the woods to gather fire wood disappeared.

Members of the community had gone out looking with their own dogs, but it was Olive who found the man dehydrated and having difficulty walking, but alive. It was while on their way back to their police vehicle that the other dogs started to chase Olive.

It turns out Olive is frightened of other dogs but. Constable Katikati had asked the others to keep their dogs away, but it was too late.

Katikati was heartbroken. He and Olive have been partners since 2012 and the two have been awarded “Best Rescue Dog” in the Eastern Cape for three years in a row.

The South African Police Service posted a plea on Facebook asking for the German Shepherd Dog’s safe return saying that Constable Katikati was “perturbed and emotionally drained” at her loss.

“Olive is my best friend and companion. She is humble and she cannot harm anyone as she is trained in rescuing drowned people, seeking missing people and seeking evidence on other crime scenes. I plead with anyone who sees her to not harm her but rather keep her and report to the police.”

The SAPS added, “Olive is our member that never disappointed us. When we send Constable Katikati and Olive to rescue someone we relax and stay assured that they’ll bring that missing person back to his/her family.”

An agonizing three days followed with Katikati and members of the police department searching the rugged mountain terrain for the missing K9.

But on the third day they found Olive near where she had found the missing man. “Olive was spotted underneath a low cliff in thick bushes by members of the search group,” SAPS wrote. “The dog was stuck there and could not get out.”

“The members then assisted her by getting through some bushes,” they added. “She was free from injuries and still full of energy.”

“Her handler, Constable Katikati was present and the member was extremely happy to find his partner alive and well.”

Katikati says he broke down crying when he found her. He told News24 of the ordeal and reunion:

“I couldn’t sleep that night. Sho, sho, sho…The bond I have with that dog…Losing this one felt like losing a child to me.

“I couldn’t hold back the tears when we found her. All that kept me alive over the last few days was the support I’d received from my colleagues and the community.”

Olive was immediately given food and water and Katikati says he plans to make spoil her before they head back to work saving many more people in the years to come.