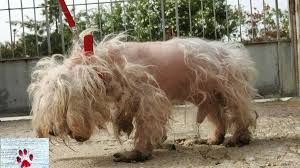 After years of being invisible, Casper suddenly appeared at the gate of an animal rescue. Disoriented and confused, he had no way of knowing his life was about to change…

Casper first appeared at the home of a volunteer animal rescuer on May 13, 2017. “Tied with a brand new leash, matching his brand new collar, he was just left there, with a hasty note that gave us all the unnecessary information, but not really saying anything at all,” writes Valia Orfanidou of The Orphan Pet. “We never ever called him Snoopy, not even once. His foster mum named him, and for us, he is Casper – he is deaf anyway, so he won’t be expecting anyone to call by his old name.”

They called him Casper after the “friendly ghost” as they all couldn’t believe the Maltese remained invisible from everyone’s view for so many years. They soon learned that the senior dog had a host of health issues hidden under all his matted fur. Casper has Cushing’s disease, which among other things, causes a constant thirst and hunger.
“He used to be a spoiled, cuddly pet.”

But despite not being able to see well or hear, the little dog does respond to one thing – hugs. Once he was cleaned (“he looked so cute after. He looked so relieved”) and given much-needed medication, Casper began to relax in his foster mom’s arms. And as Valia says in the video, Casper used to be a “spoiled, cuddly pet” so is it any wonder he “belongs in a hug”? He’s also learning to walk on a leash – and loving it. Although they don’t know how much time he has left, this sweet dog will get as many hugs as he wants.