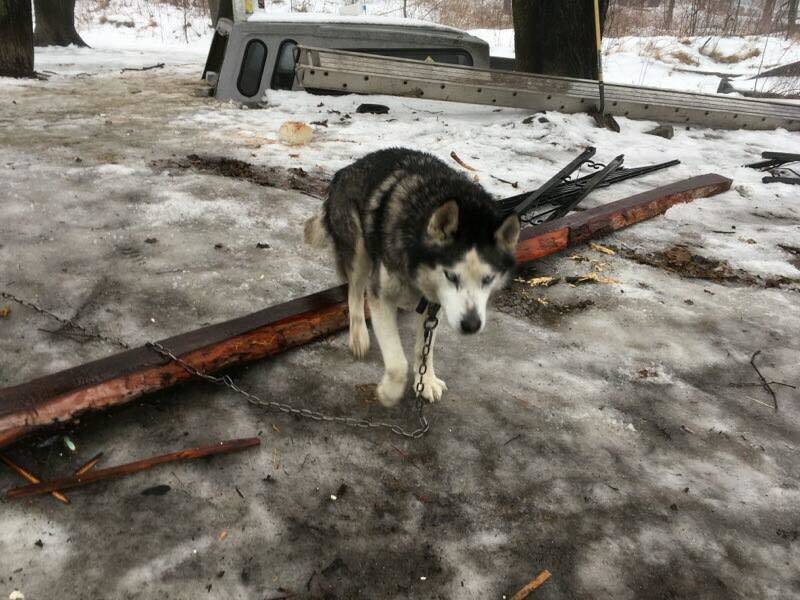 After spending his whole life outside at the end of a chain, Cloud didn’t know how to act like a dog. But then…

A senior Husky who lived his entire life tied to a heavy chain is now experiencing the comforts of family for the first time when fate intervened.

Emergency workers in New Philadelphia, Pennsylvania were responding to a call after a roof of a home being demolished had collapsed, when they noticed the Husky tied out back of the property.

Cloud was skinny and appeared malnourished and had a large mass on his back.

He was standing on the snowy ground with feces surrounding him. His doghouse was a truck cap, but not adequate shelter to keep him warm enough in the freezing temperatures.

However, it’s now a felony in Pennsylvania to leave dogs outside in the cold for more than 30 minutes at a time thanks to Libre’s Law.

Hillside SPCA came and explained to the owners that they were breaking the law, after which Cloud was surrendered to them.

When Cloud was examined by their vets they discovered that Cloud was deaf and the mass was a perianal adenoma, caused by failure to neuter. But given that he was around 10 to 12 years old, they decided it would not be safe to operate on him, but he is on the appropriate medications.

Being inside a shelter did not go well for the Husky, who was not familiar with being inside. He would pace around all day and was stressed. So Tricia Moyer, assistant shelter manager at Hillside SPCA, got ahold of Eleanor Garrett of Senior Dog Haven and Hospice to see if she could foster him.

Given Cloud likely lived outside his whole life, he simply did not know how to live indoors. He kept walking into things and would constantly pace around. Tricia was very upset by Cloud’s condition and related to Eleanor that he “wasn’t acting like a dog at all,” and he was “just a mess”.

Eleanor wanted to make Cloud comfortable, but he would avoid contact with her and her children.
She decided to leave him alone for a while and it seemed to have helped.

Then one day when Eleanor went into the laundry room where Cloud was resting, she felt his paw swipe at her foot. Cloud was asking her to pet him. And when she leaned down to pet him, he gave her kisses.

“[H]e started giving me kisses, and anytime I stopped, he would swipe his paw at me again.” Eleanor said. She told the Dodo that from that day forward, Cloud was happy and relaxed.

He soon figured out he could go outside into her fenced-in yard, but he preferred coming inside where it was warm, dry and comfortable.

And when Eleanor thought Cloud was ready, he met a couple who fell in love with him and adopted him.

Cloud immediately fell in love with them too and he made himself at home right away.

The family created a bucket list for Cloud with all of the things he’d never gotten to do and experience in his life.

He’s been going on lots of walks, and he has a large orthopedic bed to sleep in. And someone who heard about his rescue will be giving him a doggie massage.

Cloud also has a new name – Titus – to go with his new life, one that lets him finally be a family dog.

If you see a dog outside in the cold like Cloud, here are some tips for what you can do, “What to Do if You See a Dog Left Outside in Cold Weather“.