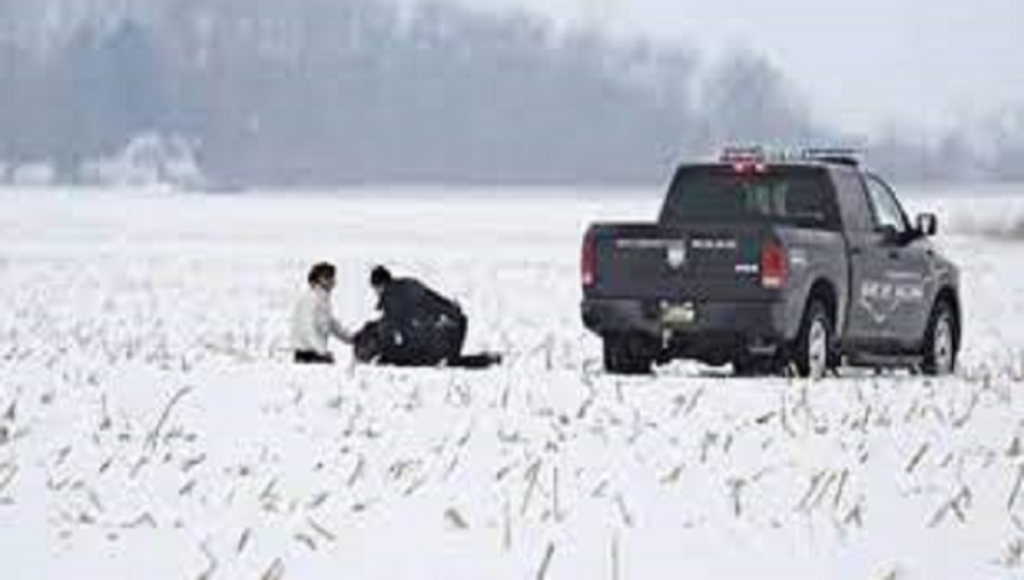 It’s not every day that you see big, tough Police Officers crying in public, but then again, things like this don’t happen very often…

After two months missing, a police dog has been found and safely returned home. Karson, a K9 with the Wilmington Ohio Police Department, went missing a few months ago after he escaped the kennel where he was staying. He was at the boarding kennel while his handler, Officer Jerry Popp, was on vacation. The Belgian Malinois’ collar and tags had been removed as they were preparing him for a bath.

Since that time, the community rallied together to help Officer Popp get Karson back. A Facebook page was set up to help track him down and on Saturday, February 21, 2015 he was finally rescued by Popp, a fellow officer and a certified K9 handler near Interstate 71 in a snowy field.

The moment Karson was safe, Officer Popp collapsed to the ground. He shared some photos of the rescue and wrote on Facebook, “One photos shows me on the ground as Sgt Fithen and Jordina console me. I’m not ashamed to admit I was completely a mess…”

“So Karson is home now, resting. He’s sleeping now and being very quiet. So this is how it all went down today. I received a call from my dispatch that a dog was sighted on ST RT 71 north of ST RT 68. The dog was in a field between Starbuck Rd and 71. I was in Xenia at the time with my partner, Jordina Ghiggeri from Lost Pet Professionals, and made contact with a dedicated Clinton Co SO deputy who told me, “Jerry, this is your dog. It’s Karson.”

“I trusted that and as quickly as we could get there we arrived in the area. I bailed out of our vehicle and started to approach him on foot through the field. Several other people in vehicles established a perimeter around the field. One of them had a telephoto lens on a camera and took several photos of the dog. It was Karson!”

“The dog was not responding to my commands as I could not get close enough. We devised a plan to approach him with a bite sleeve by driving a vehicle into the field. Jordina advised us to try and get ahead of him. Myself and Sgt Fithen drove into the field slowly and I then got out and started walking toward him.”

“Karson began to walk, then run away from our truck. At that point we had no choice but to Bo and Luke Duke it through the corn field. Sgt Fithen chased Karson in the truck as I tried to catch up. Eventually with several turns and slides in the field, Karson gave up and stopped. Sgt Fithen then got out of the truck opened up the doors and lay down in the snow. He made himself very small and nonthreatening.”

“Karson froze as Fithen began to talk to him. I walked as slowly as I could to the truck and got behind Karson. Karson turned his head and saw me and then he jumped directly into the front seat of the police truck. The doors were closed and windows rolled up. He was captured just like that.”

“I then proceeded to kneel in the snow and cry. Jordina ran over and we all had a group hug.”

“So thanks to Dept J Smith and Dep Wright for never giving up today. To everyone that was there today on Starbuck Rd with binoculars and cameras, I love you.”

“To Jordina Thorp Ghiggeri, where do I start? The level of professionalism that you have shown, and the countless hours you have spent with a nervous, OCD police officer cannot be measured.”

“To Lost Pet Professionals, you are one of a kind. The knowledge and training you put into your company and employees goes far beyond anything I have ever seen. It’s been a pleasure to work with your company and a professional like Jordina.”

“To my dispatchers at CCSO, WPD, XPD and GCSO, you have handled calls of sightings for two months and did a phenomenal job. There are so many others to thank and you know who you are. For now we’re just enjoying the moment and resting. He’s home…”

I’m very glad Karson made it home safely and back where he belongs!

Share Karson and Officer Popp’s happy reunion with your friends and family!