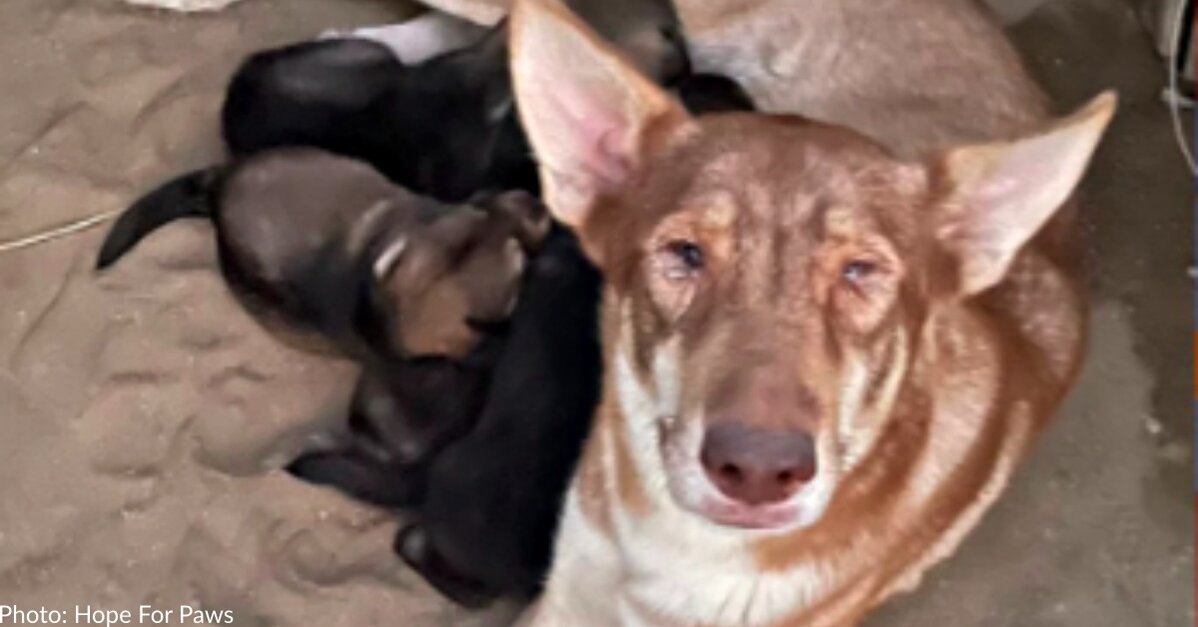 They wouldn’t have survived if it weren’t for kindhearted people who took them in and called for help.

Hope For Paws, an animal rescue in California, received a text for help on their emergency line for a mama dog and her six puppies.

Apparently, the pregnant dog was abandoned in the desert where she gave birth to six puppies. Thankfully, she found refuge at a plant nursery. The kindhearted owners provided food and water for her and reached out to the rescue for help.

Eldad, founder of Hope For Paws, drove three hours to the desert to save the dogs. When he pulled onto the road of the nursery, Desert Moon Drive, he decided to name the mama dog Moon.

The sweet and friendly dog came right up to her rescuer wagging her tail. “When Moon heard my voice, she ran towards me as if she was expecting my arrival, laid on the ground, and rolled over… it was such a sweet moment,” recalled Eldad.

She knew he was there to help and didn’t protest when he picked up her puppies.

Eldad was blown away by how trusting and loving Moon was and called her “special” multiple times.

After making sure the puppies nursed and treating Moon to a cheeseburger, all the dogs were loaded into the vehicle for the drive back to Los Angeles.

Moon and all six of her puppies – Andromeda, Nebula, Supernova, Comet, Lynx, and Crypto – were examined by a vet and then placed in a kennel together for a good night’s rest.

Moon is around three years old and arrived with eye infections in both eyes due to a condition called entropion. The condition causes her eyelids to roll inwards and irritates her corneas. Once her puppies are weaned, she will receive surgery on both eyes to fix the condition.

As for the puppies, all are in good health and believed to be six-week-old German shepherd mixes. There are five females and just one male, Crypto.

The following morning all of the dogs received a warm bubble bath before heading to LA Animal Rescue. They are currently in a foster home but will soon be ready for their forever homes.

The rescue is taking applications for Mama Moon, which they describe as “extremely eager to please and very gentle”, and all of her adorable puppies. Find out more here.

Eldad thanked all the Hope For Paws’ supporters who make rescues like this possible. “To all our supporters – we love you and we really appreciate all your help.”

Check out the rescue video below and don’t forget to share!