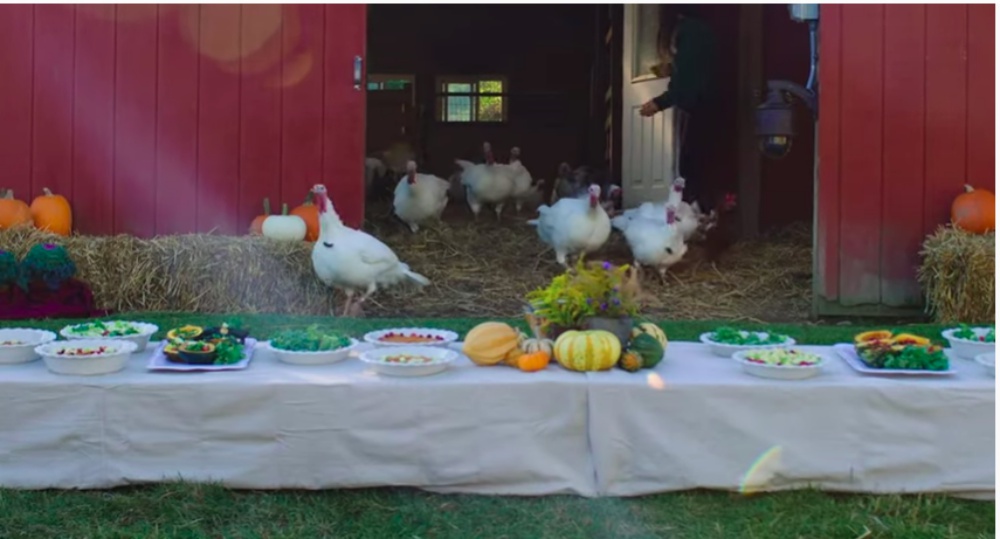 Kale was a favorite!

Farm Sanctuary just hosted their annual Thanksgiving feast, “Celebration for the Turkeys”, where turkeys were the guests and not the main course.

The tradition started in 1986 in a small backyard as a way to show people how intelligent and loving turkeys are. Each year the event grew and is now celebrated across the country.

This year’s celebration included caregivers telling the stories of five rescue turkeys and giving a glimpse at what a day in the life of a turkey is like at the sanctuary.

The spokesturkeys for this year are: Tutu “The Charmer”, Ferris “The Hotshot”, Sandy “The Sweetheart”, Venus “The Champion”, and Jackie “The Queen”.

Tutu was rescued from a factory farm by an artist who hoped to tell her story through art, but when that fell through she brought her to the sanctuary. She is now one of the friendliest turkeys in the flock.

Ferris was saved from a feed store along with another turkey tom Faye. Instead of ending up on someone’s plate, they are enjoying a carefree life at the sanctuary. Ferris struts all day long according to his caregivers.

Sandy arrived after her guardian, who saved her from being slaughtered, surrendered her to the sanctuary during the devastating wildfires in California. She’s blossomed into an affectionate turkey.

Venus was rescued along with her “sister” Serena. Venus was cruelly debeaked, a process commonly performed on turkeys at factory farms, but has put her painful past behind her. She’s now assertive and loves getting scratched under her wings.

Jackie is the leader of the flock but arrived in poor shape from a factory farm. She was also debeaked and very timid, but has transformed into a “bold and lively leader”.

While their stories of how they ended up at the sanctuary differ, they were all almost killed for a meal. Now they roam free with the rest of the flock at the sanctuary.

The sanctuary states that 46 million turkeys are killed for Thanksgiving alone. They hope to inspire people to look at turkeys in a different way, as sentient animals and not food. For over 30 years, the sanctuary has offered Adopt a Turkey project to encourage people to remove turkey from their plate and symbolically adopt a rescue turkey instead.

If you aren’t sure which turkey to sponsor, you can take this quiz which tells you which is your soulmate – proving turkeys and humans are more alike than you think – and sponsor your “turkey twin”.

The lavish feast, which actually took place at their California and New York locations, was prepared by caregivers and no detail was spared. The menu included kale salad with fresh cranberries and apples and of course, pumpkin pie (canned pumpkin in a pie dish).

The tables were decorated with tablecloths and beautiful centerpieces for the honored guests. The food was placed on the tables and the last thing to do was welcome the turkeys.

Once the doors were opened, the turkeys rushed over to the food and immediately started to devour it. To the delight of the staff, the turkeys leaped on the tables and helped themselves to the tasty food, with kale being a favorite this year.

Due to the global pandemic, visitors were not allowed this year but the event was recorded and shared online for all to enjoy.

“I think the majority of people are really compassionate, they just haven’t been exposed to these animals in that way,” said Daniel Singleton, a caregiver at the Watkins Glen, NY location. “Once you see a creature feeling joy you don’t want to take that away from them.”

Are you ready to take the pledge to not eat turkey this Thanksgiving? Sign here and share it with your friends.

“This Thanksgiving, you have a choice. Sign our turkey-free pledge for a compassionate Thanksgiving today,” stated Farm Sanctuary.

Watch the flock enjoy a delicious feast in the video below and don’t forget to share.