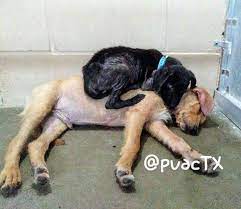 They knew they were in a bad place.

Two puppies found warmth and comfort in a place that was anything but and that sweet moment saved their lives.

Jeremiah and Neal arrived at the Texas high-kill shelter as strays. They were picked up separately, and both were all alone in the world.

That’s when Jeremiah crawled over to Neal and lay on top of him. Seeing the two puppies in such distress, the shelter reached out to Stacey Silverstein, the founder of Rescue Dogs Rock NYC.

When she saw them, she couldn’t say “no”.

“Jeremiah sought comfort, and Neal was accepting of it,” Stacey Silverstein, founder of Rescue Dogs Rock NYC, told The Dodo. “They knew they were in danger.”

If Silverstein had not intervened, the fate of the two puppies would likely have been they would have died. It’s the sad reality of high-kill shelters that many dogs that are sick or injured, pregnant or perfectly healthy will end up euthanized.

Silverstein also rescued another dog (Jagger) from the same pen. All three dogs had mange and Jeremiah has an eye ulcer that may result in blindness.

They are now getting medical treatment and fostered after if they aren’t adopted right away.

“They’re amazing little dogs,” Silverstein said. “They’re very nervous and not well right now, so obviously they’re weeks away from recovery. But they’re all puppies — so sweet and nice. Hopefully they will recover quickly, so they can come here to New York to be adopted into perfect homes.”