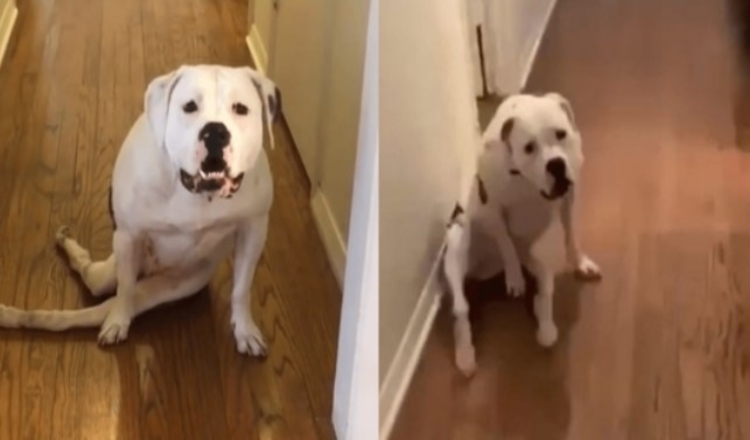 Paralyzed dog named Pigeon reacts with excitement and joy when she receives her dog’s wheelchair. Now, she’s living the high life with her siblings.

Pigeon the pup is living the high life now, thanks to some really loving new parents and a wheelchair. But that wasn’t always the case with Pigeon. This precocious, always-happy dog is paralyzed from the hind legs after getting into a car accident with her previous owners. She suffered a broken back and was left to fend for herself at the vet office.

Luckily for our blessed pup, she was adopted by a kind-hearted owner who was attracted to her spunky personality. Erica, Pigeon’s new fur parent, did not see her as a burden but as part of the family. It took months of rehab and medications for Pigeon just to be able to support herself on her front legs and move around while dragging her hind legs.

Despite her injuries and handicap, Pigeon’s upbeat personality and friendliness shine through. She loves playing with her siblings and moving around the house. She was frustrated at first because she found her movements restricted and slowed down considerably. And that’s when Erica decided to get her dog a wheelchair because she wanted Pigeon to feel like herself again — happy, playful, and carefree. She went to Eddie’s Wheels, which makes custom chairs for pets, and had one made for Pigeon.

And the first time Pigeon put on the wheelchair was magical!

You can see her reaction very clearly in the video. First was confusion, then hesitation, and curiosity as she looked up at the owner with questioning eyes. Then it was pure excitement as she jumps to let her owner know that she’s raring to go outside and try out her new wheels. She even led the way and was first out the door.

According to Erica, “The second we put her in a wheelchair, she became a different dog,” she explained. “Most dogs don’t take to their wheelchairs immediately. Pigeon truly acted as if her chair was an extension of her body and it was amazing.”

Pigeon uses her wheelchair every day and is always ready to play in the backyard with her siblings or walk around the neighborhood. She doesn’t look like a paralyzed dog anymore — just a very happy, healthy one.