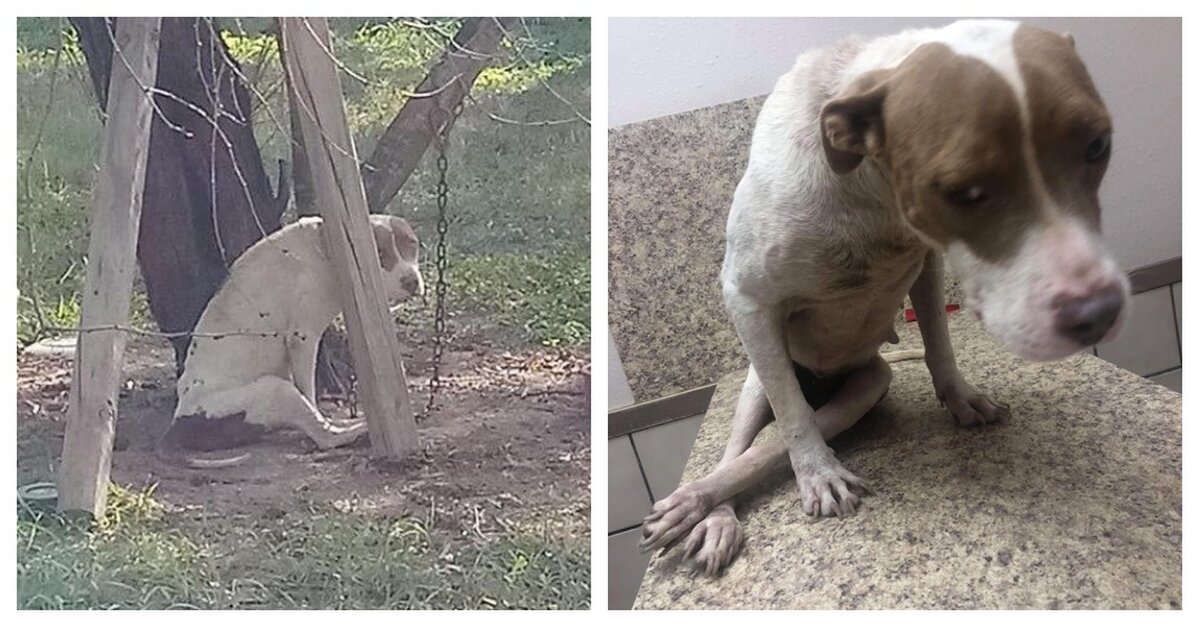 The sweet girl pulled herself along with her front feet and dragged her backend. The chain was wrapped tightly around the tree making it impossible for her to reach the food or water bowls.

Dogs are “man’s best friend” and deserve to be treated as such. Sadly, not all people view or treat dogs this way.

Animal rescuers from Dallas DogRRR were heartbroken when they saw a paralyzed dog chained to a tree in south Texas. The sweet girl pulled herself along with her front feet and dragged her backend. The chain was wrapped tightly around the tree making it impossible for her to reach the food or water bowls. Rescuers immediately contacted the local police and animal control for help.

The mixed breed dog looked malnourished and in desperate need of medical attention. They hoped the neglectful owner would surrender the poor dog to the rescue.

The rescue believes all dogs deserve a chance and refused to give up until they rescued the dog. They wrote, “We are rescuing this DOG!”

With the help of a local animal control officer, volunteers with the rescue were able to free the dog from the chains. They named the sweet girl Ottilia, which means fortunate heroine.

She was carried to the car and brought to a vet to be examined. The rescue posted, “She is paralyzed and overheated… her temperature was 103.7 when she arrived at the vet. We have done blood work, x-rays and an exam. She is slightly anemic, her white count is low and she’s very dehydrated.”

The medical team thought that Ottilia’s paralysis could be from a tick bite. She arrived with ticks on her ears, but the tests came back negative. “The doctor does not see a fracture or trauma to the spine, but mentioned a possible fungal infection or tick disease despite the test being negative. We are sending blood work out and they have recommended a biopsy of the bone.”

Ottilia is on the way to a vet in Dallas that will hopefully determine the cause of her paralysis and if possible, help her walk again. While her road to recovery will be long and hard, she is surrounded by loving people that will do anything she needs.

She will never be chained again and will finally see that there are good people in the world.

“We are documenting everything and will send to the police department,” posted the rescue. Followers are hoping it will lead to charges against the neglectful owners.

Be a voice for the voiceless.

WARNING: the video below will break your heart. It was taken during the rescue.