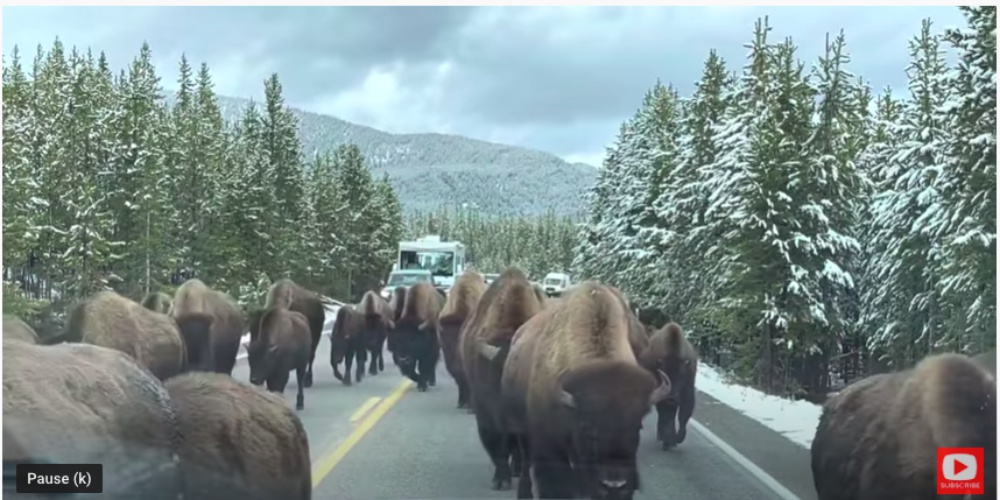 Check out the video!

A couple was driving into Yellowstone National Park when they witnessed a “once-in-a-lifetime encounter”.

Snow had just fallen and covered the pine trees along the road creating a picturesque scene, but what caught their attention was a herd of over 150 bison traveling down the road.

Traffic came to a halt as the herd headed straight for their vehicle.

While this is a common occurrence in the park, most visitors are not accustomed to seeing large animals surround their cars.

They grabbed their phones to capture the amazing moment and shared it on YouTube for all to see.

In the video, a woman can be heard saying, “They keep coming. Oh my gosh, this is crazy!” While fascinating to see, they worried the large bison would damage their rental car.

“They could do some serious damage to the car right now,” stated the woman.

At one point they spot a couple of “massive” bison in the herd and worry as they come dangerously close to their rental.

In complete disbelief, the man says, “They’re still coming…” and said to the bison “don’t get too crazy” as a few trotted by the car.

“I wonder if people are as flipped out as we are,” commented the woman. She whispered “please be nice” to the herd as they made their way around them.

Eventually, the bison cleared out of the way and traffic resumed.

The couple shocked by what they just saw could only say “wow” and “holy cow” after it was over.

What To Do If You Encounter Bison On The Road

Park rangers ask people not to honk their horns if they encounter bison on the road. “Please save the honking for the city,” they said.

Instead, they ask people to be patient and enjoy the incredible moment or carefully drive around them. Remember, we are visitors and this is their home.

While bison and other wild animals may approach or come near your car, never try to pet or feed them. For your safety, keep at least 25 feet away and observe them from afar.

Check out the video of the recent bison traffic jam below and don’t forget to share.