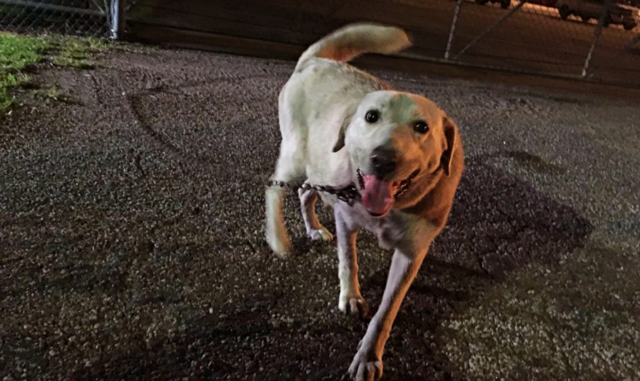 Dr. Michael White of the Harris County Animal Shelter in Texas was in shock when he turned on the morning news and saw a reporter standing outside his shelter’s gate.

Dr. Michael White works as the director for the Harris County Animal Shelter in Texas. One morning in particular, his morning routine was sent into a tailspin when he turned on the news only to see news reporter Janelle Bludau from the KHOU 11 News Team, standing outside his shelter’s front gate.

Bludau was in the middle of a news story that featured a Lab Mix who had been chained up and abandoned outside on the shelter’s fence. A determined Bludau stood staunch in her announcement to viewers that she was not going to be moving from the spot until someone arrived to look after the dog. Naturally, Dr. White wasted no time in getting to his shelter in order to help.

While one would assume a trauma such as being abandoned and tied to a fence would have an impact on the dog, she was actually quite friendly. Her tail wouldn’t stop wagging for the news crew. But she was also hiding a secret that would require assistance from Dr. White.

During the routine examination, everyone was shocked to learn that she was actually pregnant. And not just that, but she was also very much near her due date. The heavily pregnant dog’s belly even dragged a bit on the ground.

Making a judgement call, Dr. White decided to bring her home with him in order to be able to monitor her while they waited for the puppies to arrive.

“I decided I wasn’t going to leave her there any longer, and I took her home,” White said. “I didn’t want her to stay up there in that condition. I hate for animals to give birth in a shelter situation.”

In honor of the news reporter who refused to leave her side, Dr. White named the abandoned dog Janelle. She made herself right at home in Dr. White’s house. She showed a big fondness for her fosterers and gave them plenty of kisses and cuddles as a thank you. And her litter of puppies weren’t far off either. In only a few short days after arriving, Janelle began showing the classic distress of labor.

Her contractions started at 9 pm in the evening. Both Dr. White and his wife knew that they were going to be burning the midnight oil.

As he explained, “My wife and I stayed up with her all night assisting in each delivery.”

Janelle, the lab mix found tied 2the gate of the Harris Co Animal Shelter by r own @JanelleKHOU & @MikeBadaBing, had 11 healthy puppies this AM! Shelter Director, Dr. Michael White, is fostering the whole fam-another reminder of how crucial fosters are! Mom & pups doin great ❤️ pic.twitter.com/A4tcunGamN

happy to report that both mother and babies are doing extraordinary. Jenelle turned out to be a great mom, and is reported to keep a very tidy “den” for her pups.

Jenelle is the epitome of motherly love. The little family will stay together until the puppies are weaned. Once weaned, both Janelle and her children will be able to look forward to a new lease on life and new forever homes full of love.