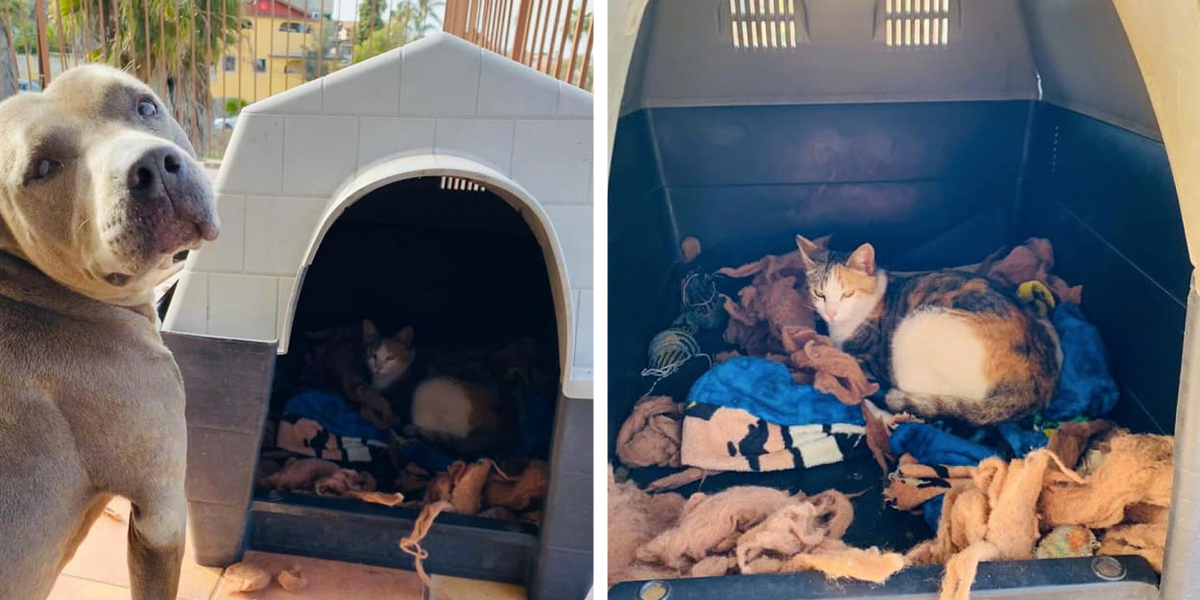 Pit bulls are affectionate and devoted dogs that will go the extra mile for those they care about. Hades, a pit bull that lives with his family in Mexico, is showing the world what big hearts the breed has.

The adorable dog takes after his father, Juan José P Flores, who shows compassion to those in need. Flores noticed an elusive stray cat in the neighborhood, so he left out food so the cat wouldn’t go hungry. He never expected Hades to befriend the little feline.

Don’t let his name fool you, Hades is a sweet and gentle dog who saw a friend in need and offered his home as a safe haven.

One day, Hades was creating such a ruckus near the back door that Flores went to see what was causing all the commotion. It turns out, his beloved dog wanted to show him something inside his doghouse. Inside was the stray cat lounging on the soft blankets.

The sweet dog proudly showed his dad that he gave up his home for the pregnant stray cat. Hades never left the side of his feline friend and stood guard at the doghouse while the cat gave birth to two kittens. “I think he felt that he was a father,” Flores told The Dodo.

The cat that the family named Nicol and her kittens are doing well. Flores said that once the kittens are of age they will be found loving homes, but Nicol will always have a home with them.

A photo of the incident went viral and people could not help but joke that the cat has simply taken over the doghouse. Flores even joined in and wrote, “Cat taken advantage, with that you don’t have to pay rent.”

All joking aside, the dog’s kind gesture didn’t go unnoticed. Countless people praised Hades and commented on his adorable face. One person said, “The most beautiful face 🥰!!!! They take the lead in humanity 💜.”

Flores shared the touching story in hopes that people will view pit bulls as the loving dogs they are. “Pit bulls are good dogs,” he said. “Hades put everything aside to help someone else. We should do the same without expecting anything in return.”